Cities seek to green up to mitigate climate change

The Greater Metropolitan Area (GAM) agglomerates 42% of the Costa Rican population, throughout 164 districts in 31 cantons. For sure, this is the largest urban area in Costa Rica, the center of the national infrastructure and government. However, when thinking about its main characteristics, urban planning is not usually among the prominent concepts, with all that it entails. 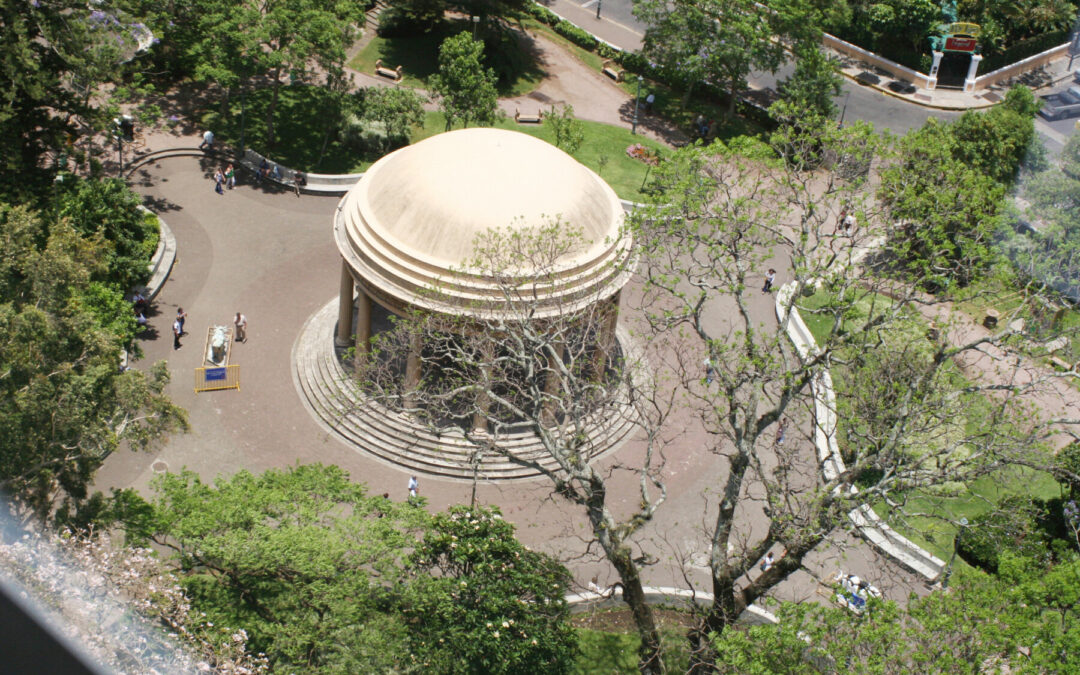 Green spaces in cities, such as parks, not only offer recreation and scenic beauty, they also provide environmental services such as noise and pollutant damping, thermal regulation, and are even refuges for birds and insects. (Credits: Carlos Andrés Méndez / File)

This lack of planning contributes and intensifies the consequences of climate change, co-responsible for heat islands and resulting in problems such as the emission of greenhouse gases (GHG), reduction of green areas or air, river or soil pollution.

To contextualize the magnitude of the problem, last year it was recorded that the average temperature of the GAM reached 43°C due to the gray infrastructure, with San José, Flores, Belén, Heredia and Tibás as the hottest cantons. The International Federation of Red Cross and Red Crescent Societies (IFRC), together with the C40 Climate Leadership Group, warned about the growing trend of heat waves in cities, described as “the silent killers of change climate”.

Likewise, the University of New South Wales (UNSW) determined that urban green areas play a fundamental role in the development of microbes responsible for maintaining ecosystem functions, such as pollutant filtration or carbon dioxide treatment. carbon. In this way, parks, gardens, and even sidewalks are invaluable for their contributions as recreation areas, temperature regulators, and pollution inhibitors.

With all this in mind, Costa Rica as a country represents greater difficulties due to chaos in urban planning or a transport sector that generated 42% of national emissions in 2017, with San José, Alajuela, Heredia and Cartago leading that ranking.

“Costa Rica, for 40 years, made an investment in creating institutionality and environmental policy, but always focused on the rural area. 70% of Costa Ricans live in the GAM or in province capitals, where there is no environmental institutionality and, in a poorly planned urban space, citizens are strongly threatened. A city that does not obey a growth projection, based on urban planning studies, will be more vulnerable to the impacts of climate change,” said Carlos Manuel Rodríguez, executive director of the Global Environment Facility (GEF).

As a result of this, the GAM —as well as some provincial capital cities— are working on greening and restoring the urban landscape with three projects for the health and development of the country. 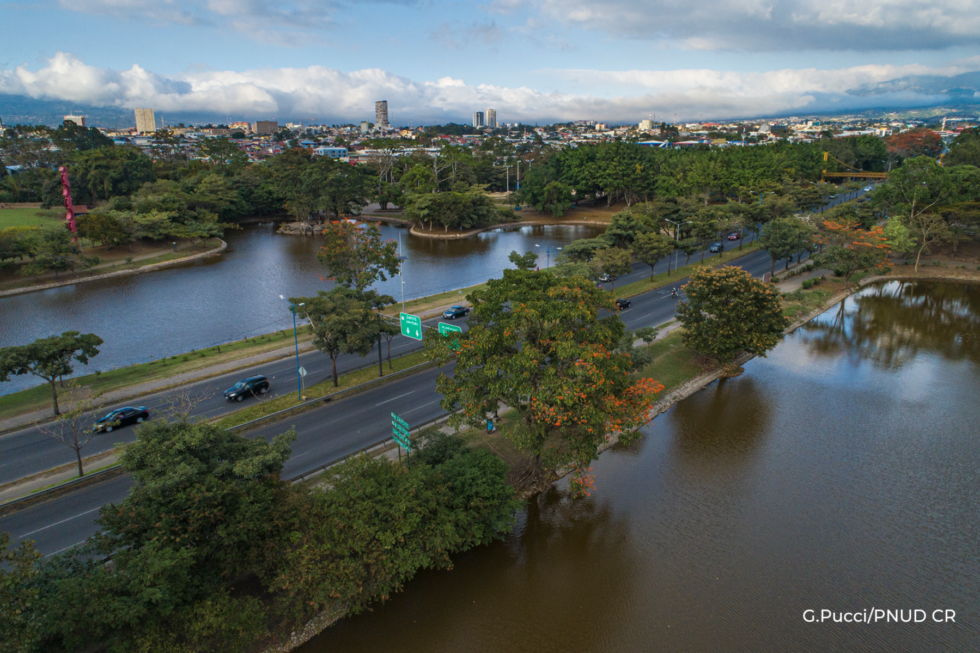 The normalized vegetation index in the GAM shows a lower average than in previous years, something that is directly associated with the rise in temperature. (Credits: Giancarlo Pucci / UNDP CR)

The Interlace project: Recovering urban ecosystems is funded by the European Union and promoted by the Union of Local Governments (UNGL) with the aim of enabling and equipping cities to restore and rehabilitate their urban ecosystems.

The approach is based on the “nature-places-people” connection, which promotes the creation of green areas and the recovery of degraded ecosystems that allow that “interlace” between people and the natural environment, all with a view to August 2024, which is the date the initiative will end.

The Interlace project involves six European and Latin American cities, including the María Aguilar Interurban Biological Corridor (CBIMA), which represents 2% of the GAM with 29% of the green area and includes the cantons of Alajuelita, Curridabat, La Union, Montes de Oca and San José.

“It is a very enriching experience for everyone and at the same time a challenge because, although it is true that there are common points in environmental issues between Latin American and European cities, cities also have different governance models, as well as resources and priorities that they allow us to learn from each other and that make Interlace products personified for each city”, commented Marcela Gutiérrez, coordinator of the project and academic at the Center for General Studies of the National University (UNA).

“Studies carried out at the CBIMA indicate high temperatures in public schools in the GAM, which is a factor of green injustice. Children learning under these conditions have compromised their cognitive functions, which conditions the teaching and learning process. Green patios, orchards, gardens, urban forests, tree-lined sidewalks and boulevards, or green roofs and walls are just a few instruments,” Gutiérrez added when asked about the rising temperatures.

Announced in March this year, the Transition to an Urban Green Economy and Generation of Global Environmental Benefits (TEVU) project promotes urban planning focused on adaptation to climate change. It is financed by the GEF, led by the Ministry of Environment and Energy (MINAE), implemented by the United Nations Development Program (UNDP) and executed by the Organization for Tropical Studies (OET).

“The current economic model does not recognize planetary limits and does not reflect all negative externalities. An example is the Gross Domestic Product (GDP), which measures the value and growth of the economy without reflecting that we pollute rivers, deforest forests, fill the sea with plastic, etc. It’s also a linear model: you take a resource, process it, and produce a product with lots of waste. We must move towards a system where everything is optimized, recycled and reusable. It is not a utopia, but rather an effort that the United Nations sustainable development goals aim at,” Rodríguez added.

For this task, there are three other fundamental sections within the TEVU: improving the urban landscape through greening, promoting the circular economy in businesses and reducing GHG emissions in cities. For the latter, the idea of ​​the electric train is considered the “main catalyst for better public transport, more efficient mobility and a significant reduction in emissions”.

“The Government has not buried any plan for an electric train that helps decarbonization objectives,” Rodríguez explained. “They come with a new project that will be adjusted, since there is an understanding among Costa Ricans that depending on fossil fuels from abroad generates a great economic impact and that, if we have a totally renewable electrical matrix, the logical thing is to move towards a system more efficient transport”, he concluded.

Replacing over-mature trees or exotic species without affecting sidewalks, pipes or other infrastructure is another challenge for the projects. (Credits: Fabricio Cerna / CCECR)

San José: the city and the landscape

The Cultural Center of Spain in Costa Rica (CCECR), with a cultural and artistic approach to the environment, wants the capital to live up to the image of the country as a leader against climate change and to make it the first green city in Latin America. This concept would be directed by the Spanish critics and curators Ricardo Ramón Jarne and Blanca de la Torre.

The process consists of three axes and the long-term idea is to comply with Costa Rica’s Carbon Neutrality Country Program, as well as to create a Country Brand where San José becomes recognized for its communion with nature.

Jarne, also director of the CCECR, stated that: “green areas are the lungs of the city. 80% of the green of San José are private gardens, many of old houses subject to patrimonial protection. If the Heritage Law does not improve, those houses that are the history of the city will disappear and, with them, their gardens. The center of the city, which should be its historical and artistic reference, is turning into a huge parking lot”.

Also, as with other projects, the transportation sector is of special concern for this initiative. “The entire city is tailored to the car and not to the citizen. We live in jails, the car is a mobile jail that lives continuously in the dams and then we arrive at our houses full of bars that become the stable jail. Is this the life we ​​want?” Jarne asked.

Finally, as a measure to promote green architecture, the CCECR will give away two San José – Madrid – San José air tickets to whoever has the best green fence in the city, this as part of the first axis of the project where it is intended to hide the bars with species climbers or vines that improve the external image of the city and provide security with respect to pollution.

In this way, Costa Rica currently has several projects aimed at urban restoration, the greening of cities and, above all, mitigation and adaptation to climate change.

These projects are joined by other similar ones, such as the Ciudad Verde initiative —launched by MINAE just over two months ago— which makes three digital tools available to citizens to guide individual efforts and thus get the most out of services ecosystems provided by nature.

Ultimately, ecosystems, biodiversity and human beings must increasingly adjust to a planet subjected to climate change.

“Costa Rica should not take steps back on these issues because it could lose world leadership and there it would lose a lot of international prestige. This country is expected to lead and generate new proposals to combat climate change from all areas in these catastrophic times that we are living in,” Jarne stated.

Wildlife in captivity: an unnecessary evil